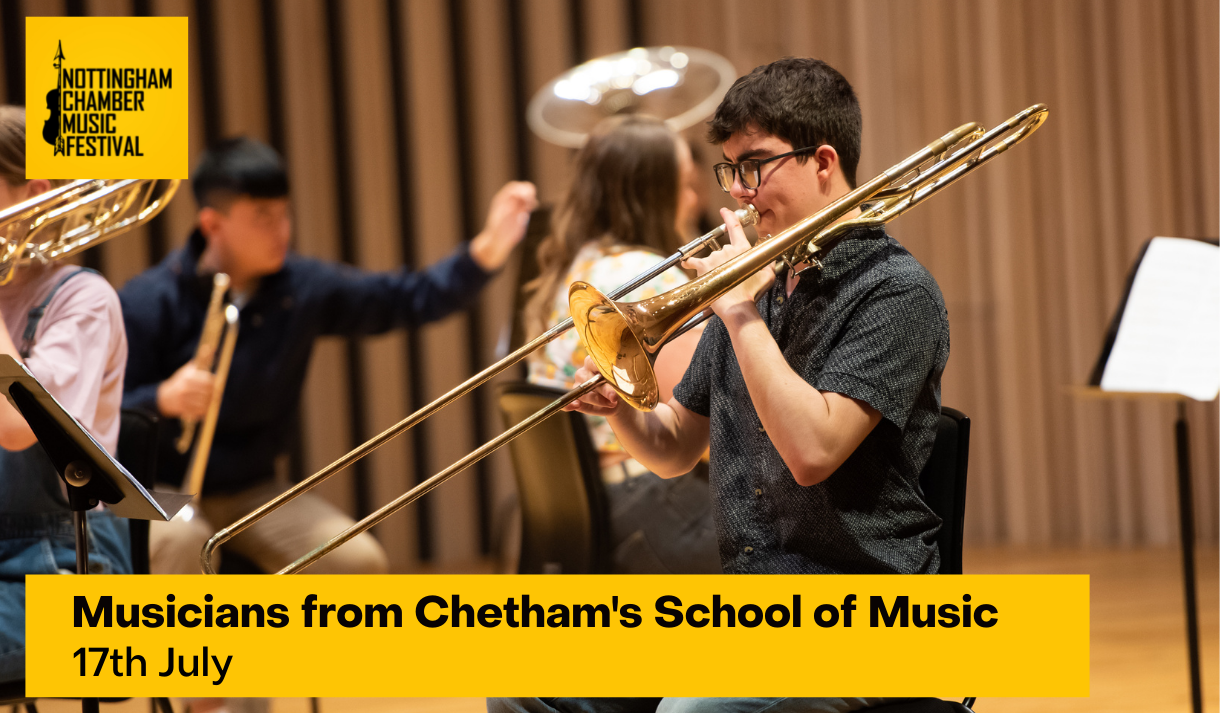 Musicians from Chetham’s School of Music

Suitable for All Ages
Admission: FREE, Booking at the online link required.

The NCMF is proud to present its first Young Artists Concert, featuring Musicians from Chetham’s School of Music. At St. Peter’s Church in the heart of Nottingham, students from the specialist music school will perform a concert featuring two of the school’s ensembles:

About Chetham’s School of Music

Chetham’s is the largest specialist Music School in the UK and is the only one based in the north of England. Located in Manchester, the School is also a national and international resource for music education – welcoming teachers, professional players, composers and conductors, community groups, school children and other young musicians, both experienced and novices, to come together and make music.

Chetham’s long history began in 1421, and students still enjoy opportunities to perform in the 600-year old Baronial Hall attached to Chetham’s Library. It opened as a charitable school in 1653, and educated the poor boys of the district for 400 years before becoming a co-educational music school in 1969. For half a century, Chetham’s students and alumni have enjoyed success at major competitions, taken up positions across the music profession as performers, leaders and teachers, and established the School as a vital element of music education in the UK.

St Peter’s Church is one of the three parishes covering the ancient town centre of Nottingham. The first church, was built on a rock above the marsh formed by the Rowell Brook. This is now St Peter’s Square, and the marshy conditions caused problems for the parish authorities for centuries. It was presumably a simple building with a nave and a round apse. It was destroyed – perhaps twice – in the mid-12th Century.

The church was rebuilt between 1180 and 1220, with a south aisle; some of this building remains in use today, perhaps incorporating fragments of the earlier church. The tower and spire were added shortly before the Black Death, which reached Nottingham in 1348 and stopped further work for some years. The final addition to the mediaeval church was the clerestory, with a new oak roof to the nave. This was built about 1480, when wood was given by Nicholas de Strelley from his estate outside the town.

Nottingham was changing its face dramatically by the 1820s, as a flood of textile workers and a huge expansion of industry led to tenements being built over the gardens and to gross overcrowding around the town centre. The church itself also underwent changes. The south door was closed about 1820, extra pews were installed and the west door was re-opened. But it was the major rebuilding of the chancel and north transept in 1877, and the associated re-ordering of the nave, which gave us most of the church we see today. The new chancel at first opened straight from the nave, giving a much more spacious impression than before (the present rood screen was erected only in 1898), and the great tower arch could again be appreciated once the organ gallery had been removed from the west end. New pews replaced the Georgian box-pews, which were used as an elegant wainscoting round the walls.

Please Note: **Bookings for this concert will open in mid- June.