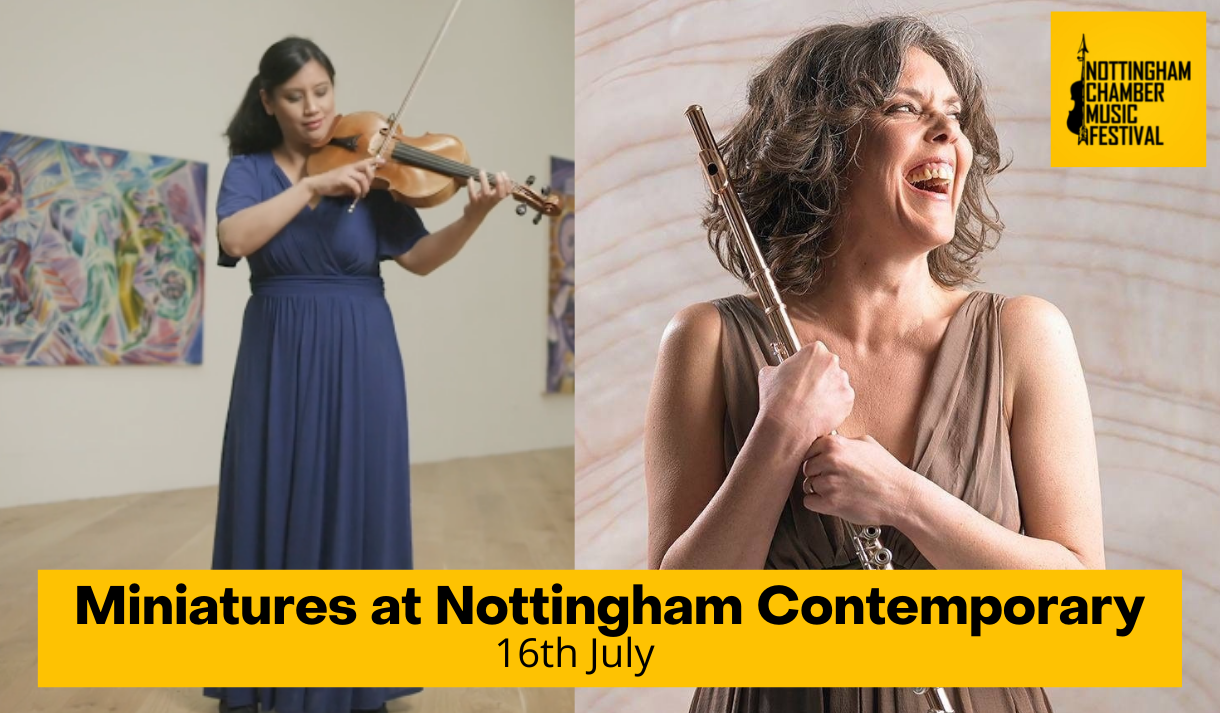 NCMF partners with Nottingham Contemporary in the city centre for a series of short “Miniatures” featuring solo and duo performances from Festival Director Carmen Flores and Guest Artist Lisa Nelsen. Visitors to Nottingham Contemporary can watch these musicians perform in the gallery amidst the newly-opened exhibitions of contemporary artists Allison Katz, Erika Verzutti, and Mélanie Metranga. Concerts last approximately 30 minutes and visitors will be free to move throughout the gallery.

*Due to Covid-19 guidelines, these concerts will not be seated and are limited to numbers of visitors allowed in the gallery at one time. 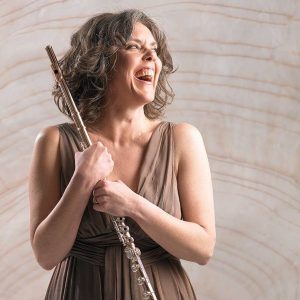 Described by The Times – London as “…a flautist and a half…”, Lisa Nelsen is internationally recognised for her versatility on the flute as a soloist, chamber and orchestra member, as well as an educator, mentor and leader in galvanising groups of musicians to work together. Facing the challenges as a musician, teacher and the Chair of the British Flute Society this year has meant adapting everything connected to her career in music.

Lisa has performed in monthly online concerts to raise awareness for charities, including The Benslow Music Trust and Artists and Residents, with her chamber ensembles Aquilae Duo (with Eleanor Turner harp) and Enigma14 (with Julian Metzger cello and Paul Turner piano); she has given lectures and webinars on performance and motivational practice methods for both the British Flute Society and Yamaha Classical Division; Lisa contributed to #100 Days of Practice on Instagram twice as a means to improve her own consistency in her work and inspire onlookers to ‘have a go’; she has written blogs for the Swedish Flute Association and for the British Flute Society periodical Pan, revealing her own triumphs, troughs and plateaus throughout these 18 months. She continues to make many venues a stage, and, having grown up on a pig farm in Western Canada, she takes her exposure to all sorts of musical genres to audiences and students to enable them to grow beyond their limits.

From her London debut at the Purcell Room to playing premieres for BBC Radio 3, coaching the National Children’s Orchestra and teaching at Wells Cathedral School, Lisa has had and continues to have a varied life as a musician.Lisa is an Artist for Yamaha Classical Division International and plays on a 14karat 900-series flute.

As Director of the Nottingham Chamber Music Festival, Carmen Flores is dedicated to creating new pathways for experiencing and performing classical music. She also served as advisor on programming to Nottingham Trent University’s University Hall and has worked closely with other venues and organisations to develop and curate music programmes.

As performer, Carmen has been soloist, Lead and Guest Principal Violas with orchestras and ensembles including the Royal Ballet Sinfonia, English National Opera, the Canadian Opera Company, Orchestra of the Swan, the English Chamber Orchestra, Britten Sinfonia, Sinfonia VIVA, and the European Union Chamber Orchestra. She is a founding member of the acclaimed Villiers Quartet (VQ), the Quartet-in-Residence at the Jacqueline du Pré Music Building at Oxford University. Hailed as one of the most “adventurous” string quartets in the UK (Strad Magazine) and “Champions of British Music” (Guardian), the VQ has made several acclaimed recordings on the Naxos, Somm, and Lyrita record labels.

Carmen is a recipient of the prestigious US Fulbright Award, and she has performed throughout the United States, Canada, Asia, and Europe and she has been featured on several BBC Radio and Television broadcasts, including BBC Radio 3’s In Tune and The Andrew Marr Show. She has participated in Les Jardins Musicaux Festivals (Switzerland), Tanglewood (USA), Pacific Music Festival (Japan), and the Boyne Music Festival (Ireland). She performs on a viola made in 2006 by British luthier William Castle.

Nottingham Contemporary is an art gallery in the Lace Market and features exhibitions on contemporary art and culture. Built in 2009, the building features a 19th-century lace pattern by Richard Birkin embedded in the concrete facade, which was found in a time capsule on the building’s site. In May 2021, the Contemporary re-opened to visitors after being closed during the Covid-19 pandemic.