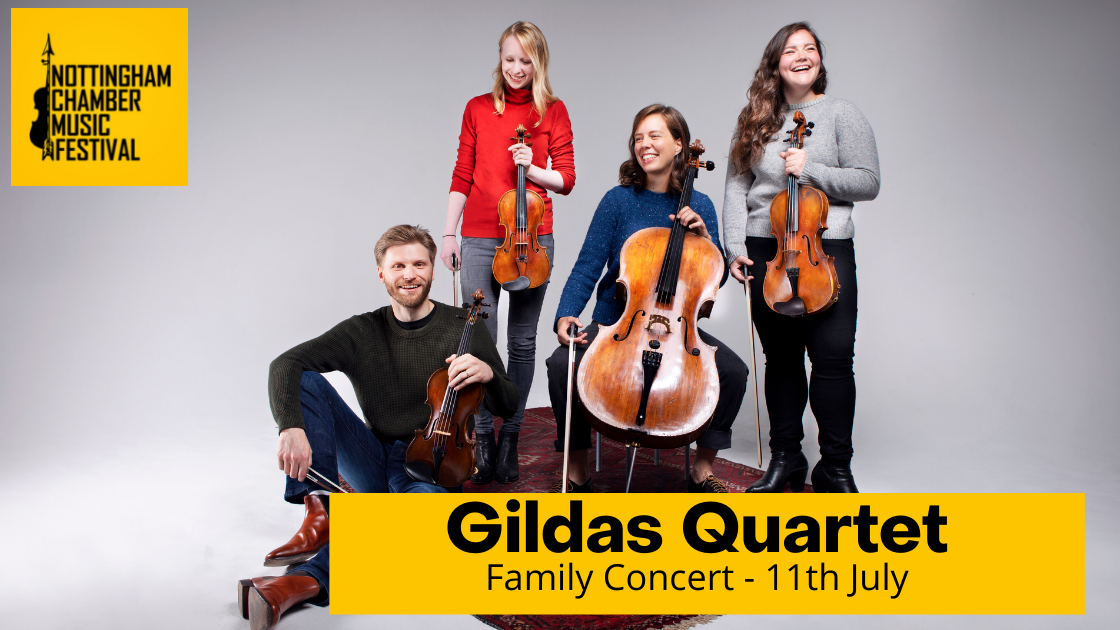 The Gildas Quartet and MishMash Productions present STRING!  A celebration of the String Quartet.

This relaxed performance for children aged 7 – 11 and their schools and families includes a diverse programme of repertoire from Haydn to Jessie Montgomery, Joseph Boulogne Chevalier to Saint-Georges to Caroline Shaw and everything in between!  Guaranteed to open eyes and ears to the fabulous, joyful world of the String Quartet.

About the Gildas Quartet

The Gildas Quartet will be joined by guest violinist Hatty Haynes for this performance. Praised for their ‘energy, verve and refreshing approach’ have performed to critical acclaim at major venues including the Bridgewater Hall, Purcell Room, Wigmore Hall and live on BBC Radio 3. Their bold and explorative approach to performance was recognised by the International Franz Schubert and Modern Music Competition, Graz, where they won first prize in the Audience Engagement Award 2018. The Quartet has given recitals at international festivals such as Cheltenham, Two Moors, Oxford Lieder and Kings Lynn, as well as touring in Europe, China and South Africa. They are City Music Foundation Artists and Associate Ensemble at the Birmingham Conservatoire. They have frequently been featured by the Park Lane Group and are grateful for awards and support from the Arts Council, Britten Pears Foundation, Tunnell and Richard Carne Trusts.

This year the quartet is really thrilled to have been able to spend time working with Mishmash Productions creating this new concert performance for children, and hope that it brings as much pleasure to listeners as it has already brought the players!

Productions include Hubbub: A Musical Adventure, developed in collaboration with the critically acclaimed Aurora Orchestra and composer Paul Rissmann Hubbub was awarded a Highly Commended in the 2016 Get Creative Family Arts Festival.  Smile followed in 2017 in collaboration with Inspire: Culture, Learning and Libraries winning the Best Family Welcome award as part of the 2018 Fantastic of Families Awards.  Strange Creatures, produced in 2019, was a third collaboration with Director Martin Berry and Musical Director Sophie Rivlin, and a second partnership with the Library Services and Music Hubs for Nottingham and Nottinghamshire.

MishMash Productions is currently funded through a Projects Grant from Arts Council England.

The Squire Performing Arts Centre opened in Spring 2017 and is one of Nottingham newest performing arts spaces. The theatre is an eco-conscious, versatile creative space for performing arts in Nottingham. The stunning state-of-the-art theatre is part of Nottingham Girls’ High School and has been named in honour of Dame Rosemary Squire DBE, a former student, to reflect her support of the project, her association with the school and prominent position in British theatre. The Squire PAC and Nottingham Chamber Music Festival have partnered this year to create events where students and families of all ages from all backgrounds can participate in music events tailored for young audiences and schools.